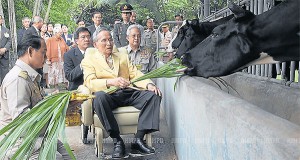 His Majesty the King returned to Chitralada Palace Monday afternoon to visit the dairy farm and royal elephant museum.

His Majesty the King feeds cows at the Suan Chitralada Dairy Farm during his tour of the Royal Chitralada Projects yesterday afternoon. The King returned to Siriraj Hospital at 5.19pm.

Members of the public were delighted to catch a glimpse of His Majesty in the royal motorcade as he made the unannounced trip from Siriraj Hospital to the palace.

His Majesty spent the late afternoon touring the royal dairy farm and other places within the palace compound.

The dairy farm is one of his royal projects set up in 1962 to select and improve dairy cattle breeds for Thailand and to promote dairy farming in the country.

After inspecting activities at the farm, His Majesty visited the Chitralada UHT milk processing plant which uses milk from 16 cows out of a herd of 43 Holstein-Friesian – a Dutch breed – which are being reared at the farm.

He then visited the Chang Ton Museum, located in the palace compound.

The King viewed statues and spent time studying the history of the royal elephants kept by each king during the Chakri dynasty.

Elephants with ideal physical appearances were known as chang ton, and the healthiest of them were used by the kings of the time as a means of transport.